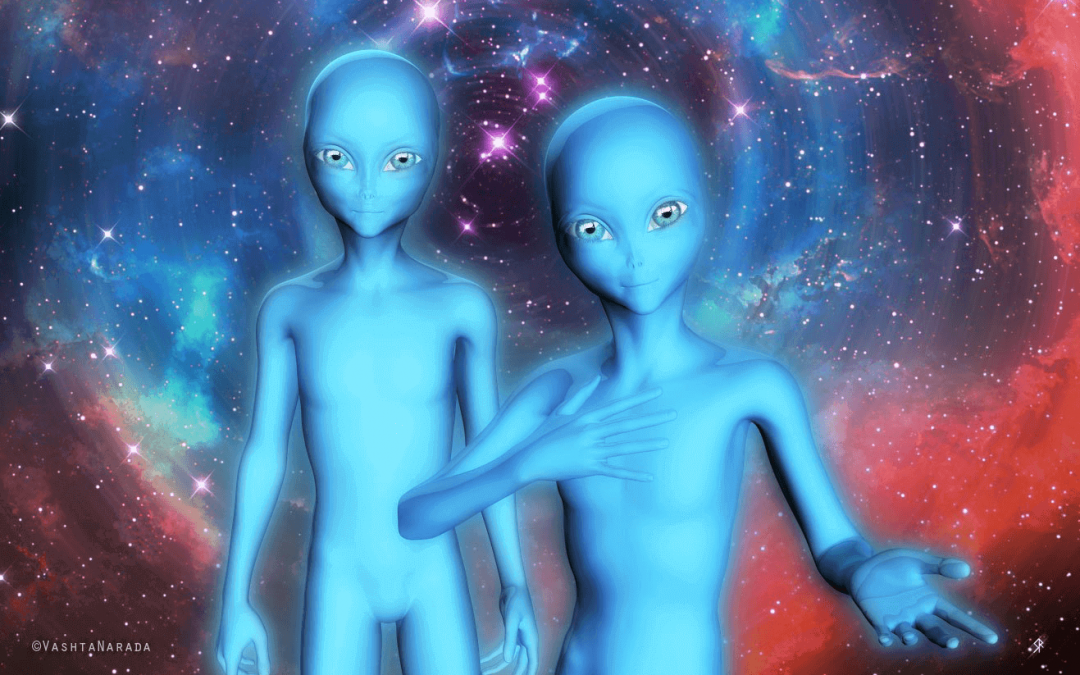 Last night was unlike any other night!

Earlier that day I got into deep meditation and all of a sudden I found myself being lifted into a very bright tube of light. As I looked up I saw this huge blue lightship. I felt I needed to trust the proces even though I didn’t know what was going to happen.

I saw flashes of blue beings and they were moving really fast, but I couldn’t see their faces. Their energy felt very Arcturian. It was almost as if they were related to the Arcturians in a way.

Then I heard a voice saying to spread my arms right in front of me, and to turn my hands into the position where the palms are faced up. So I did that. In an instant I saw lines were created in the palms of my hands. A spiral was drawn in each hand. Then the spirals got active and golden and bright blue energy came out of my hands, very powerful. I could feel these imprints, these spirals rotating like crazy in my physical hands even though I was still in meditation. They told me they’ve given me these imprints to empower my healing skills.

A few seconds later, I saw a very bright purple crystal in the shape of a triangle, and it went straight into my 3rd eye. The energy was so strong. And then Ashtar appeared. He explained to me that this crystal is a direct link to him and that it’s also meant to get my vision more clear. The only thing I need to do is to let this crystal spin. He also told me that the lightships will sometimes take me in to expand my healing abilities and that it’s time to use all of my skills to help humanity.

After that, I got out of meditation and I didn’t feel so well, actually I felt really sick to my stomach, felt no longer grounded into Earth and felt this upcoming headache. I decided to rest a while on my couch and my body felt so cold. I really had to take a moment to integrate what had just happened. I could still feel the spirals rotating in my hands.

Later that afternoon, all of a sudden I felt the urge to say very loud “Okay guys, show yourself to me in my dreams! Who are you? I am ready to really connect on a very deep level. I am not afraid when you come to me in my dreams. I won’t run. I really am ready. I need it in order to move on, to understand your energy.”

The rest of the day I was looking up to the sky, because I could still feel their energy and I just knew something was about to happen.

By the end of the day still nothing had happened and I decided to get some sleep.

So, this morning I woke up and in an instant I remembered what had happened while I was sleeping.

In my ‘dream’ I was sitting on my couch near the window. I felt I had to look at the beautiful night sky. Some stars started to move real slow and I realized these weren’t stars at all, they were lightships very far away but very slowly coming in closer and closer.. And then out of nowhere I saw this huge dark green lightship with hundreds of bright lights hovering above the playground, right in front of my house. I felt the energy increasing in my living room. So I turned around and there they were.

Two beautiful bright blue beings were standing right in front of me. They were a little bit taller than me and their energy was so enormously loving and they seemed te be very happy, but also very curious. They gazed deep into my eyes and smiled. Their blue eyes were full of sparkles and love. They actually had humanoid eyes, only a bit more round and slightly bigger. You could clearly see the energy moving through their bodies by the constant change of their blue colour. It was an ongoing proces.

Then one of these blue beings stepped towards me. And very very carefully he stretched out his arm and gently put his hand on my cheek. He smiled and was really observing what my energy would do by the touch of his hand. It almost felt to me as if he touched a human’s face for the very first time. The exchange of our energy was on such a deep level of oneness. The other blue being stood two meters away and kept on sending loving energy towards me. It was on such a high frequency and I felt like I was in some sort of pink bubble of unconditional love, together with these beautiful blue beings. After twenty seconds or so the blue being pulled away his hand and stepped back. I could feel their gratitude and then they faded away.

I immediately looked through the window to see if the lightship was still there, but all I could see were the twinkles of the lightship disappearing into the magical night sky guided by many others ships.

I am still in total awe of this encounter and I am pretty sure that these blue beings belong to the group of beings that gave me the imprints earlier that day.

I really hope I can get to an even more deeper level of contact to find out who they are and where they are coming from.

So, this story will be continued.